It is Patriot Tractor, Truck, and Equipment LLC’s mission to provide premium quality equipment, parts, and service; also an exceptional experience to our valued customers, first responders, and to those who have served in our beloved United States Military. 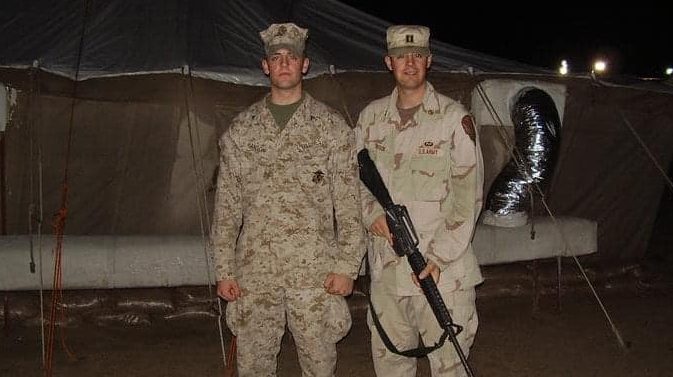 Pictured above are Jon and Jim in Camp Victory, Kuwait in 2005. Jim was returning home from Iraq, while Jon was headed to Iraq.

Jim and Jon Hanson are brothers and co-owners of Patriot Tractor, Truck, and Equipment LLC. The company is veteran-owned and operated. Both Jim and Jon grew up in Dover, NH, and are graduates of Dover High School.

Jim joined the United States Army after high school and went on to college at the University of New Hampshire. Through the UNH ROTC program, he became a commissioned officer. Jim completed airborne school and served with the 1st Cavalry Division’s mechanized infantry. He spent over a year in Baghdad, Iraq in 2004-2005. Jim retired as a Lieutenant Colonel from the Army in 2020 with 26 years of service.

Jon joined the United States Marine Corps after high school and served as a rifleman in the 1st Battalion 6th Marines, where he served two combat tours in Fallujah and Ramadi, Iraq. After his enlistment, he has served with the Somersworth Police Department as a Patrol Sergeant and sniper on the SWAT team.

"At Patriot Tractor, we support our troops, veterans, law enforcement, and first responders. Come down and show proof of service to receive a discount. You’ve earned it!"

Call Us
Find Us
About Us